Feel your body as you rest on or rise away from the earth.

Listen to subtle shifts of weight, pressure, and other sensations of your bones and organs as you move through space.

Allow yourself to become aware of that part of your self that moves—not directed by your thinking mind, but self awareness generated from the mysterious and multitudinous processes of your body itself.

Those words are typical of the directions for personal research that you might be encouraged to undertake in BodyMindMovement workshops and trainings. Part of the growing field of somatic movement education and therapy, BodyMindMovement is a contemporary expression of the ancient understanding that by being engaged in attentive dialogue with your bodily self you can move more easily, enjoy freedom from pain, learn in different ways, perform your life’s work more efficiently, and enjoy greater vitality and expression.

The term somatics was coined by Thomas Hanna, a California body worker, in the 1970’s. He wrote: “Somatics is the field which studies the soma: namely the body as perceived from within by first-person perception.” Based on the Greek word soma, signifying the luminous body transformed by spirit, Hanna’s term “somatics” refers to healing practices based on understanding the body from the point of view of sensation. It embraces the wholeness of your lived experience, including the dimensions of body, psyche, and spirit. Somatic movement is therefore movement that is sensed and shaped from within, rather than from an external source. Somatic movement education and therapy is the process of a practitioner assisting another person to awaken his or her body-mind consciousness in movement, which creates the possibility of transformation and healing.  Somatic movement educators and therapists help deepen their clients’ psychophysical awareness – how the body moves the mind, and how the mind moves the body.

Notice your breath rising and falling in your abdomen and chest.

Feel your lungs expanding and condensing as you inhale and exhale.

Note which part of your torso is not moving, then place your hand on that spot and invite breath to fill it.

How does this make you feel?

At the crossroads between meditation, movement analysis, and embodied anatomy, somatic movement education first drew my attention as a young dancer/choreographer and then later as a parent. In 1991 my son William was born prematurely and suffered brain injuries either in utero or during the birth. Sensing that something was lacking in his treatment by the medical establishment in Pittsburgh, at three years of age we sought the help of a somatic movement therapist.  At that time he had no speech.  He also had very low muscular tone in his trunk and spasticity in his limbs, resulting in extremely limited movement capabilities. During sessions with William, the therapist began to teach me the techniques of sensory stimulation and movement facilitation needed to sustain his progress. He gradually learned to crawl and creep and to move in a more organized fashion. What was doubly astounding to me was that the principles I was learning from the therapist on William’s behalf were directly applicable to my work as a teacher of movement, as a choreographer, and as a company director—I began to feel that these sessions, ostensibly directed toward William, were flowering in surprising ways in all parts of my life.  The principles turned out to be global, and the process started me on my personal journey as somatic movement educator and therapist.

One example of William’s journey demonstrates the seemingly miraculous effects of movement awareness. The therapist had spent a weekend trying to elicit a particular movement pattern from William, but was unsuccessful. She had told us that in many children lacking speech, that movement pattern could stimulate pathways in the brain that lead to language expression. The night we got home I continued working with him, and he was suddenly able to do the pattern—a real breakthrough! By the end of the week his use of language had increased from two poorly articulated words to the beginning of a functional vocabulary: I was shocked when I pointed to a broom, asking, “what’s that” and got a clear response: BROOM!   Two months later, while I was on tour, he said to my wife: “Daddy’s not home.  He’s in Estonia.”  It was his first complicated articulated thought.

Visualize spaces between your joints.

Move the spaces gently, conscious that your bones do not touch their neighbors.

Move your joints again, acknowledging the slippery quality of the synovial fluid that inhabits the spaces.

How does it feel?

While my experience with William demonstrates how conscious movement can alter the lives of children, practitioners integrate body-mind awareness into many adult disciplines and pursuits. BodyMindMovement training has immediate applications in movement-based disciplines—such as dance, yoga, athletics, and martial arts—and in therapeutic modalities such as psychotherapy, physical therapy, occupational therapy, bodywork, and massage therapy.

How the process works with adults is exemplified by the story of a private client. Amy first came to see me as the result of a traumatic skiing accident, having torn most of the ligaments in her right knee. She had had reconstructive surgery for the knee and months of physical therapy, but still felt that the leg could not support her. During her first visit we worked on integrating internal movement from her hip to her knee to her ankle.  Afterward, she was able to walk up stairs without twisting and stiffening her knee and hip, and she gradually gained strength and confidence in movement. Her posture improved markedly. We looked at the functional relationship between her knee and kidneys, and in our third session Amy found that her right kidney area had been condensed and tight for some time. When she learned to relax the kidney she experienced waves of anger and pain that became directed toward her husband and parents. Part of reclaiming her ease of posture had to do with acknowledging and expressing those emotions and acting on them. In doing so she was able to take a new posture in her life as well as in her body, and gradually she relinquished the holding that had originally contributed to her knee injury. She came to the realization that the knee injury was no accident, but the result of the physical compensations she had made for not expressing her emotions freely. In this process she was also able to give up her dependence on an anti-depressant medication and to stop taking a heart medication that helped to control palpitations. Amy is a banjo player and a member of a bluegrass band, so finally we worked on the posture and physical balance involved in playing a 40-pound instrument held in front of her body. She discovered greater ease and pleasure in playing and performing. She is now beginning to share this embodiment work with others through working with private clients herself and bringing somatic awareness to her yoga teaching.

It is never to late in this life to have a happy body. Somatic movement helps you feel better, think more clearly, and find balance in your body and your relationships in the world. Anyone who wishes to heal patterns of stress that affect the body and mind will benefit from exploring the various somatic movement disciplines, from first-generation modalities such as the Alexander Technique and Feldenkrais Method to recently developed modalities such as Continuum Movement and BodyMindMovement, a method of somatic movement training which I developed out of the tradition of Bonnie Bainbridge Cohen’s Body-Mind Centering approach.

In May 2012, Hong Kong’s White Lotus Centre will present a week of introductory BodyMindMovement workshops covering diverse topics in somatic movement awareness, including The Radiant Heart; Breathing the Body, Breathing the Mind; Coming Home to the Body; Balancing the Three Brains; Flying With Six Wings; and a series of classes on infant motor development called Happy Babies.

Notice how reading the preceding words has impacted your body: what shape has it taken, and how do you feel physically?

Close your eyes for a moment while you gently move your hands over the skin of your scalp, neck, shoulders, and arms, stimulating your nerve endings. Then initiate movement from your skin.

How do you feel after receiving your own touch and movement?

Have your breathing and your sense of self changed from this short exploration? 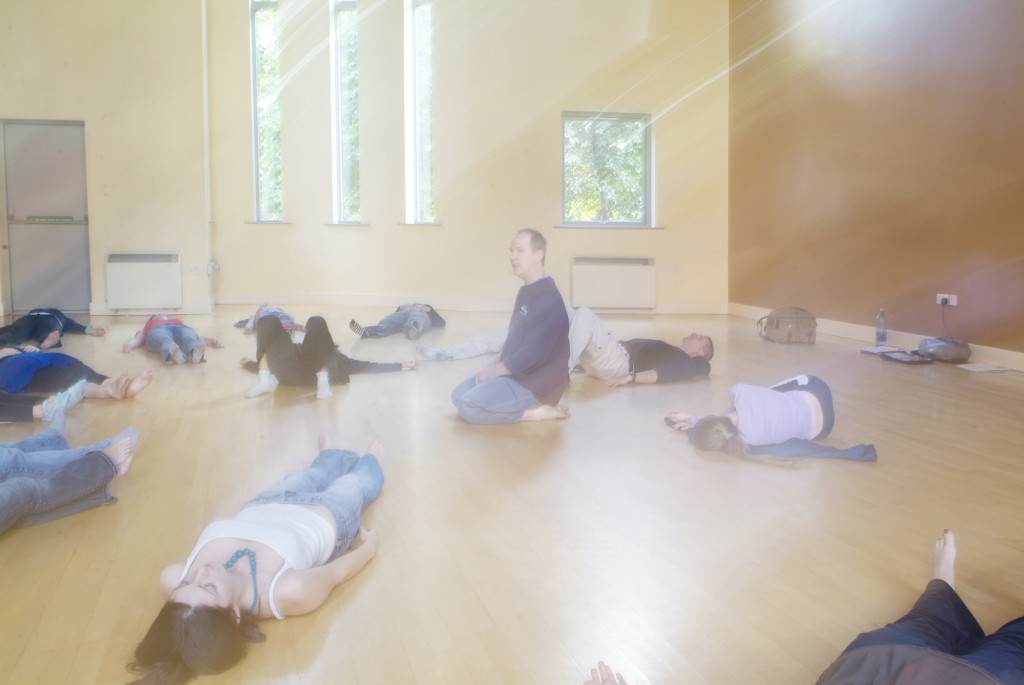 Mark Taylor is a somatic movement educator and therapist who directs the Center for BodyMindMovement, with training programs in Pittsburgh, PA, Eugene, OR, and Mexico City. As a choreographer he founded Mark Taylor & Friends in New York, directed Dance Alloy in Pittsburgh, PA, and was on the dance faculties of Princeton University and the University of Limerick, Ireland.  He was the U.S. Program Director and Program Coordinator for the School for Body-Mind Centering, directed by Bonnie Bainbridge Cohen, and co-directs the Embodied Performing Arts Program with Katy Dymoke in London, U.K.  Taylor teaches movement workshops and embodiment practices in the U.S., Europe, Asia, and Central and South America, maintains a private movement therapy practice in Pittsburgh, and is a director of the International Somatic Movement Education and Therapy Association (ISMETA).

for mind body energy
for self-development